Simon is a London based Graphic Designer and Illustrator. With a philosophy of "Good design excites", he strives to combine graphic design and creating work that genuinely stimulates people's emotions.
Specialties
Website
http://excites.co.uk/
Blog

I would keep it simple and describe my work as simply digital design and that I am a freelance digital designer. It’s easier with my parents as I show them a magazine illustration, a new print, a scarf or wallpaper on their iPad and they understand the end result of what I do for other people it isn’t as easy as that. I would go on to further explain that my work whether some class it as art, design or branding is all a way of me trying to make the world look and function better and hopefully excite people along the way.

It seems as if your style has gone from a very physical process to highly digital and geometric. How has your process changed, and what is your current process for making your geometric prints? Is any of it generative art involving coding?

My work is forever changing and so my process is really about trying something different or expanding on something I have been doing. I love experimenting whether it creates a great piece or a terrible piece I’ve still learnt something valuable from it. A number of my more complex art is coded via processing which is an amazing tool and fits my style very well which as you said has become more digital and geometric of late.

My general process for creating my print work is to start with a sketch usually of a basic structure and from that I will then either apply it via processing or just go straight in to illustrator and simply experiment with the style and colours until I have ended up with something that I’m generally happy with. I will then leave it alone for a bit and then come back at it with fresh eyes to see if there is something missing. Generally speaking though, my best works are ones that I do in one sitting.

It looks like you are doing a major update to your personal site. What can we expect to see in the new version?

Yes I’ve been so busy last year and had quite a few NDAs that prevented me from showing off work for a certain time and so I didn’t get round to updating my portfolio with this new work and I’ve really just being posting mostly personal work over at tumblr over the last 9 months. Tumblr to be fair has been great as it is a nice sharing platform and the numerous tumblr radar posts have been great exposure. However the one issue I find with Tumblr is that is really about the present and not really as good at showcase past work like a portfolio site does especially when you have hundreds of images.

Anyway I thought it was also about time I updated site and so the new site is going to be a more immersive and responsive site and will have some nice hi-res artwork on display (compared to the current 670px jpegs I currently have).

What tools can’t you live without? What tools are you lacking?

I think I could probably live without most things and just adapt with what was available. However I do think I would find things hard with a pencil, notebook, Macbook, Adobe Creative Suite and a nice Epson printer.

I’m currently lacking a couple of tools; a 3D printer and a laser cutter.

If you could put the idea of “No regrets” aside for just a second, what is one decision in your career that you wish you could undo?

There have been a number of commissions which I have turned down either because I didn’t have the time or they just didn’t excite me enough (and so I wouldn’t have given it my all, even though all were generally nice clients). However one that towers above them is a decision that I think would have taken my career in a totally different direction which was turning down an offer of a full-time design role with Google and moving to San Francisco. They offered me a role pretty soon after they had commissioned me for a job but timing wise it wasn’t great and it just didn’t feel right. Since then I have turned down other jobs like Deutsche Telecom just recently for a digital interactive design role but Google was one I still look back on and wonder what if…

I would be surprised if any one creative doesn’t worry about this. However, I’ve had periods of ups and downs, as everyone does, with their levels of creativity but the number of times I have had these I’ve almost come to a realisation that they are just part of the whole creative journey. I think it is important to power through these down times for the most part – albeit everyone has a different ‘power through’ process. Mine is generally to lock myself away in a room, others like to take time out and it’s really whatever works for you.

My latest vice is archery. I think it’s a very interesting sport which is both relaxing as well as being competitive and I find it a great way to get clarity.

Next up is Lego. I have been a fan of Lego since I was young and I think it’s a brilliantly simple toy with endless possibilities and I think it should be encouraged more in schools for teaching.

Other vices, in no specific order are films, music, chocolate based foods, creating strange and wacky smoothies and walks on the beach.

Where have you been finding your inspiration?

My favourite book resource currently for inspiration is Graphis Annuals of which I have inadvertently started to collect. I like to look at what has been done before and see if I can do something different or take an idea and show it in a completely different light.

Some of my latest inspiration has come from Roger Dean and his amazing artwork and also old school math and astronomy text books which I find fascinating.

I think they both have their merits but I am in the Jason Fried camp and feel that a more flexible work environment promotes more creativity that a stricter one. Most of the commissions I’ve been most proud of and which have had the most impact have been ones that I’ve been given free rein and find this always produces the most creative solution for me. Not to say that discipline isn’t important and timescales definitely have to be adhered to but too many constraints stifle creative processes.

One of the things I find most troubling is the lack of teaching (for instance ethics, copyright and pricing knowledge) that new design students get coming out of their studies. I can’t really comment on this as I’m self-taught but from what I have seen there are lots of gaps with students’ knowledge. Things which wouldn’t necessarily need to get from experience. I know a few new designers who heavily undervalue their work and most students don’t seem to know basic pricing which is fine if you are going into a design agency where that will be taught and done for you but not for people who are going it alone into freelancing.

Music is without doubt the only way to getting me into my groove. This week Flume has been doing it for me last week Mike Oldfield.

Unfortunately I have no experience of working in agencies myself but friends, I think, would agree there are those that do and those that don’t – and those that do are the ones that are currently making waves – ustwo is one I have admired for a while and they seem to have a excellent approach to encouraging individualism within their designers. 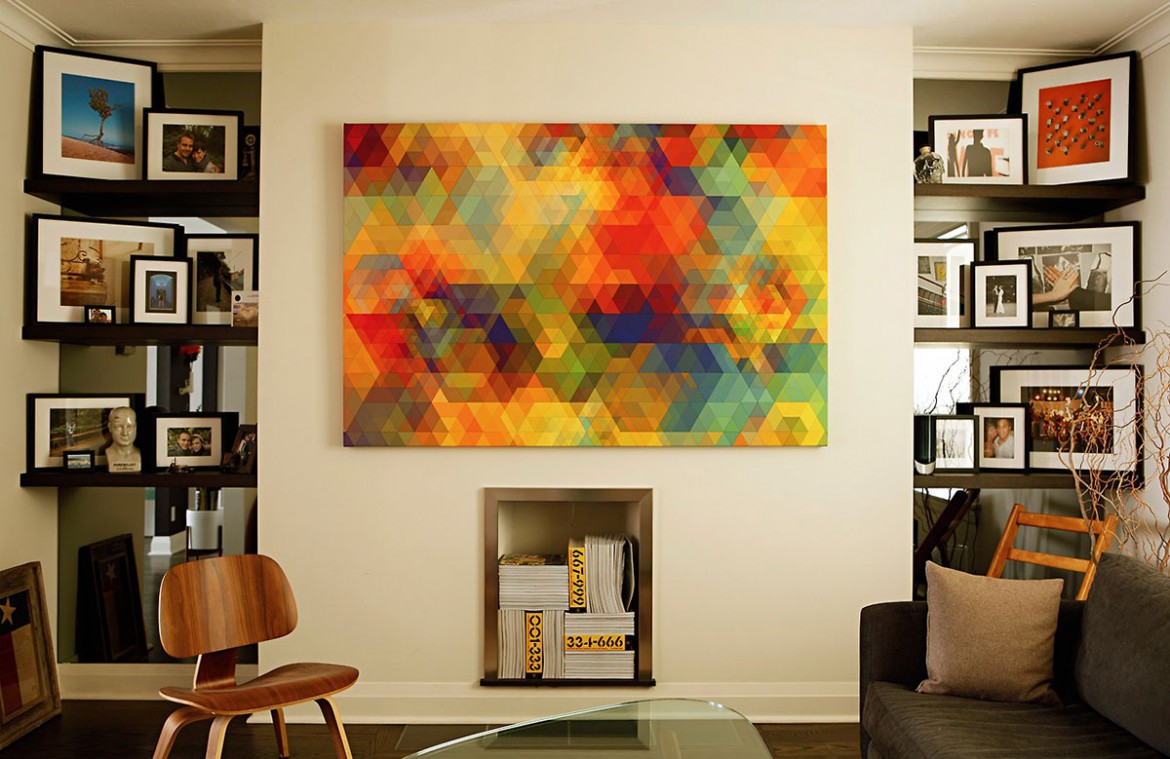 Detail of a Simon C Page Print in live environment.

Something I am working on right now is some geometric styled glass which is going to be used in Virgin’s Atlantic clubhouses and hallways so look out for those if fly with Virgin.

And I have just finished a branding project for a new housing portal start-up, Whereabouts.

In the pipelines I have some new traditional wallpaper installations with flavorpaper with some multi-coloured tiled Cuben designs which are looking great.

Finally some new prints are coming to rareminimum.com. I have a new set of space prints which are a little bit different than anything I have done before, a bound leather A3 art book of 20 removable letter-pressed geometric prints and finally after months of work I am releasing my new range of silk scarves and pocket squares.

– I’ve got a degree in applied mathematics that I don’t think many people know but wouldn’t be a big surprise to people who follow me and my work.

– I’m a bit of a geek with Filemaker databases and I’m also a rather advanced with MS Excel and visual basic. Both of which are a great way of combining functionality with good design.

– A final thing that people might not know, unless they have stayed in one, is that a large number of major hotels in New York have original artwork by me in their presidential suites.

Joshua Davis – he contacted me last year about doing a collaboration as he’s a fan of my work but it just didn’t really happen. I love his work too so hopefully we will be able to get together this year and sort something out. His generative art has been a big influence on me.