Jamie Kosoy is an award-winning programmer, educator and technologist. He’s the Founder & Technology Director at Arbitrary. Jamie teaches in the MFA Design + Technology program at Parsons. Prior to that Jamie was Technology Director at Big Spaceship, a TechStars mentor and teacher at General Assembly.
Specialties
Website
http://arbitrary.io/
Interviewed
May 2014
Share This

To 5th graders I’d start with my past. I’d tell them that I used to make web sites for movies and television shows, then made NikeAir.com and Skittles.com and now I make iPhone Apps and games and all sorts of other computer things along that same line.

To my parents I’d say that I’m somewhere between a computer programmer and an artist. I try to make things people have never made using the web, phones and anything else that has anything to do with a computer.

You were at Big Spaceship for over 7 years. They are renowned for their innovative work, and a pile of awards. What are they doing right to get them to that level of work?

Well, first off is the awards thing. It’s nice to receive awards. Humbling. But awards are something you get for work you’ve already done. While I was at Big Spaceship nobody ever kicked off a project and thought “We’re going to win so many awards with this!” We certainly understood the value of awards both from a recruitment point of view, but we were striving for something else – pushing our own limits, making stuff we had never seen before.

The biggest thing though was the notion of what creative meant. We didn’t have a Creative Director while I was at Big Spaceship. We’d never call the work “creative”, and we’d never call the people who made it “creatives.” That was and always has been table stakes. Are you a project manager? Great, you’re a creative. Programmer? You’re creative, too. We tried to make sure everyone had a fair say in every project and I think that was the difference.

You’ve also taught Design and Technology at the Parsons School of Design for over 5 years. What is it about teaching that drew you in and keeps you there?

Teaching is so rewarding. The student’s are so inspiring. They’re so hungry and passionate and driven. It’s refreshing to get away from a world of business requirements and pitches and so on.

I was initially brought on by Dave Carroll, a full time faculty member there, who met me at a conference. We went out for drinks and he offered me the opportunity and I took it thinking I’d teach for one semester and add it to my resume and that’d be that.

I’m leaving Parsons as of this semester to move to California and it’s breaking my heart a bit to do so.

Your new company, Arbitrary, seems to be taking an innovation-first approach to priorities. Innovation often requires a very specific formula that involves the right type of clients. In your experience what is the best way to find and attract those types of clients?

If you build it they will come. Simple as that.

It’s one thing to be innovative; it’s another to be thoughtful with it. As a company, we’re not just using technology just to be fancy about it. We believe our kind of innovation begets quality, which in turn means a more engaging product or project. It’s a lot of fun. We’re pretty choosy about who we work with – we’re now 9 months in and all of our clients as of late have been direct, with exciting and irreverent opportunities. It’s a lot of fun.

Humans build tools that dramatically amplify their innate human abilities. What tools can’t you live without? What tools are you lacking?

Professionally I can’t survive without the Internet. Being able to Google an answer for a code question would leave me totally underwater. I qualify this next one as “tool” per say, but I couldn’t survive without collaborators. I need a team of people around me to push me to my limits. I love working with groups of artists, designers, illustrators, coders, and whoever else making crazy stuff. Making it alone just isn’t the same.

I don’t really know what tools I’m lacking, honestly. I think I’m a pretty barebones guy. I guess I’ll know it when I see it.

This is kind of ongoing, but I wish I would take a few years off and go to graduate school. I’ve been teaching at Parsons for the last 5 years and I can see how inspired it is to be surrounded by people learning and making for the sake of doing it, and I just don’t think I have the guts to commit to it. I admire that drive.

Besides my insane fear of becoming irrelevant? I guess coffee, though I just gave that up for tea.

First off, I think with Yahoo that was about culture change as much as anything. She’s been trying to alter the course of an aging industry titan. Whatever they were doing before she got there needed a bit of a shock to the system. I’m certain Marisa Mayer taking over a healthy, vibrant Yahoo would have a very different approach to that sort of thing.

I come from the “as long as the work gets done” approach here. I feel that as long as collaborators feel empowered, challenged and motivated it really doesn’t matter if they’re working in Germany or on the moon – they’ll do a good job.

This year has exposed a lot of the problems in the industry, right? Basically if you’re not young, white and male you’re probably not a culture fit in many startups apparently….

I worry a lot about the dichotomy between the business of technology companies and the makers of those technologies. Generally it feels like the spirit of making these days is one of openness, collaboration and community. Then there are the big companies across the tech scene creating a kind of Wal-Mart effect, centralizing business that used to belong to a lot of smaller local companies. I’m not sure how I feel about that.

Take for example this tweet. It feels a bit gross and mean-spirited to anyone who can’t afford Uber. And in the meantime many of the smaller mom-and-pop cab companies can’t possibly compete with the service.

I guess I’m looking forward to a day is isn’t like… you’re either a giant tech company with a vision of a new world order or you’re totally irrelevant.

I’m a creature of habit. I need to do the same thing every day to get there. Wake up at 8:15, shower, off to work, make a list to start the day of every microscopic thing I have to do on a project, code code code, tea break at 4PM, code code code, go home, rinse repeat.

Anything that throws that off throws off my groove.

Ha! I’m a huge Calvin + Hobbes fan, and I was immediately reminded of this strip Watterson drew once.

Oh, I think there will always be people who want to work outside of a specific system. In our line of work that might be Robert Hodgkin or Seb-Ly Delisle or someone of that sort. And then there are others who do great inside of the agency environment. The folks over at B-Reel and Active Theory come to mind. Collectively they’re doing great things.

Either way has it’s own idiosyncrasies. I suppose you could argue that it’s a bit unnatural to always need exactly an hour to brainstorm, or a Discovery Phase or something like that.

We’ve spent the last few months working on Receipt Bot, a photo booth that prints your photos on Receipt Paper. They’re hilarious and super fun! Each one is named, too. 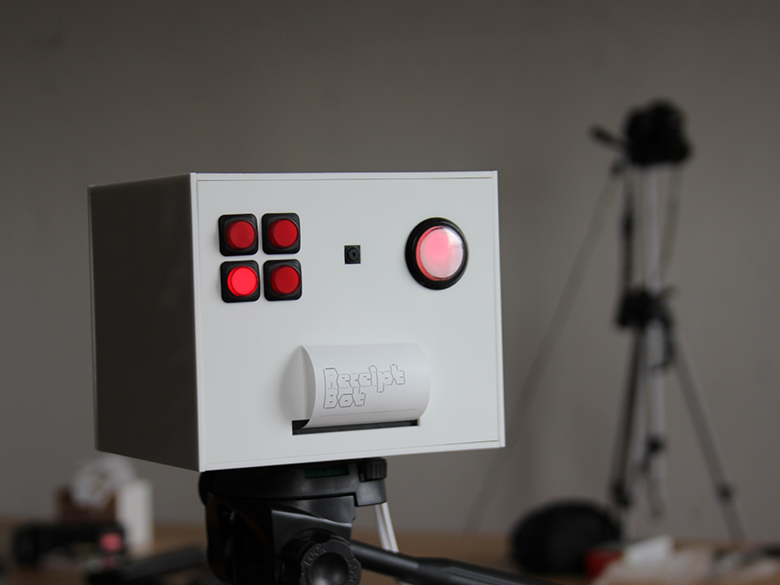 I cook. I cook really well. And I cook like I code – I favor experimentation and learning over depth of knowledge. In the past I’ve made homemade ice cream, doughnuts, pasta, fried chicken, sausages and so on.

I’d love to take a stab at sous vide cooking at some point.

GMUNK would be a good one. Super inspiring and hilarious.