That depends on whether you’re asking about my company or me personally. My company builds engaging interactive experiences for smart clients like Microsoft, Google, Mozilla, and EA.

My team relies on me to “make anything better”. I’ve had a varied career that has encompassed a lot of disciplines, and I’m usually happiest when playing at the intersections of those fields.

For example, on a current project I have been involved with concept development, directing art & animation, tool building, technical architecture, writing code, client/project management, and user experience. It keeps me from getting bored.

You quite successfully transitioned from a lot of Flash Development to heavy interactive HTML development.

I still love the Flash Player, but it’s definitely on a downward trajectory. We still do the odd little Flash project, but almost all of our work is HTML/JS nowadays.

I think HTML will be the realization of Flash’s early promise – a universal UI layer. The ability to build a rich UI once and deploy it virtually anywhere with no (or in real life, minimal) modifications. There are still a ton of quirks and gaps in functionality, but that’s part of where the fun comes in.

What tools can’t you live without? What tools are you lacking?

My grandfather was a professional woodworker. When we went through his workshop, I was amazed by the wealth of custom tools he had built to aid his creative process.

As coders, we are similarly empowered to build our own tools. I think doing so separates good coders from great ones.

I use a large number of off-the-shelf tools, but I have also built a ton of my own. These range from major efforts that redefined a creative workflow (ex. Toolkit for CreateJS, now integrated into Flash Pro CC), to tiny command line tools that have a single purpose but save us 20x the time it took to write it.

We’ve got a ton of exciting client work on the go, but sadly I can’t talk about any of those projects yet.

On the skunkworks side we’ve been doing a lot of interesting stuff. Our game division (Treefortress) launched it’s first commercial game “Bardbarian” on iOS, Android, Blackberry, and Steam. The CreateJS open source JS libraries are continuing to expand – we’re getting over 50,000 hits per hour to the libraries on our CDN, which is totally insane to think about. We also launched v2 of RegExr.com, which is a tool I originally built in Flash 6 years ago to learn Regular Expressions, and we rebuilt from scratch in HTML/JS.

If you could put the idea of “No regrets” aside for just a second, what is one decision in your career that you wish you could undo?

No regrets! Honestly, I can’t think of one. I haven’t made any cataclysmic mistakes thus far, and while it’s horribly cliché, most of my larger missteps have taught me something important.

I think all creative people feel this way. In fact, I think it helps drive a lot of successful creatives. Pairing a genuine passion for creating new things with a near-crippling fear of losing your muse can be very motivating!

Video games are my usual go-to when procrastinating. Also cartoons and books. And Reddit. And cocktails.

Where have you been finding your inspiration?

This is one of those questions I hate being asked. It’s like the adult version of “what’s your favourite colour?”. Every interview includes it, and I just don’t have a ready answer for it.

Inspiration is never the result of a single input. It is when a number of inputs, usually from disparate sources, unexpectedly combine to spark a new idea.

For me, that usually happens while zoning out in the shower, so I guess you could say I’ve been finding my inspiration in my shower.

Almost my entire team is on-site. When it’s possible and reasonable, I believe that having the whole team in one space makes collaboration more dynamic and efficient, and helps new ideas disseminate more quickly. Those “sparks” of inspiration happen in groups too, and I think they are more common with personal interaction.

My team is REALLY awesome, and I trust their abilities completely, but I still get very involved with project details in specific situations. I don’t micro-manage (I hope), but I’m also not afraid to jump in and code up a particularly difficult bit of logic, or design a UI that I have a strong opinion on. At the end of the day, my name is attached to everything we do, and I want to be proud of that.

The compartmentalization of skills. The days of the pure designer or developer are long gone. Building truly great experiences today requires a deep integration of function and form. Collaborating at this level requires a shared language and understanding.

Our designers don’t write a lot of code, but they are incredibly technical. Likewise, while our devs don’t necessarily have fantastic aesthetic sense, they do understand and deeply respect user experience and design principles.

I wish I knew. I tend to jump between totally unrelated tasks constantly. For example, I responded to this interview by answering half a question at a time over the course of a day.

Once in a while, usually late at night, I will drop into a groove, and be able to crank on one task for a few hours straight. I’m incredibly productive during these sessions, but it’s rare that I can push myself into one intentionally.

I’m not a fan of the traditional agency model. I think most agencies insert themselves between clients and creatives, syphoning off budget and introducing a layer of artificial chaos to justify their involvement. This not only disrupts the entire creative process, but often dilutes the end result into mediocrity.

A few years ago, I swore off doing agency work, and we went direct to clients. Now our projects are far less stressful, we have vastly happier clients, and we’re delivering higher quality results.

So no, I don’t think agencies tend to be great environments for creatives to thrive in. 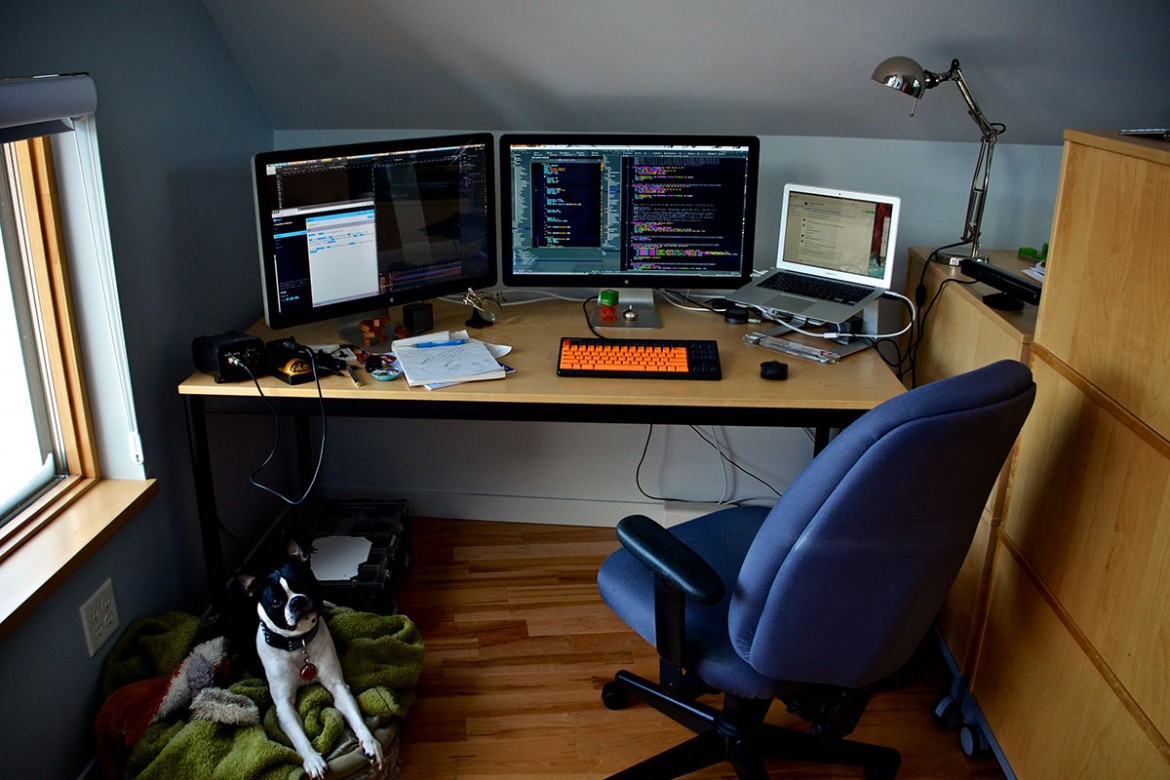 I can mix one helluva Manhattan. I’ve also been having a lot of fun messing with electronics (Arduino and etc), but don’t really have anything I consider worth sharing yet.